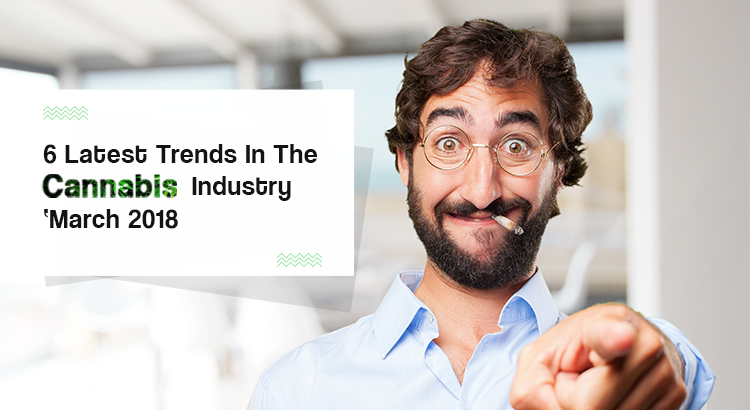 As legalization of cannabis industry is spreading rapidly, in the United States, it is gradually becoming the land of the red, white and green. Earlier, this week, we saw that Congress had protected medical marijuana research from interference by U.S. Attorney Jeff Sessions, in the new federal spending bill.

In 2017, the legal marijuana/cannabis industry hit $10Billion in nationwide sales and is expected to hit around $24.5 billion by 2021. – Tom Adams, managing director of BDS Analytics

The cannabis industry has also been creating lots of job opportunities.

“There are 9,397 active licenses for marijuana businesses in the U.S,” according to Ed Keating, chief data officer for Cannabis Media.

According to the BDS Analytics:

Here are some of the 6 latest trends in the Cannabis Industry:

The recreational use of cannabis is now legal in 9 states (i.e. Alaska, California, Colorado, Maine, Massachusetts, Nevada, Oregon, Vermont, and Washington) plus the District of Columbia, and other 30 states are allowed for medical use.

More and more states are lining up to join the legalization wave in the upcoming months.

California is the big kahuna in the cannabis industry, as it represents half of the total cannabis retail sales as compared to the rest of the cannabis market in the U.S.

To know more with regards to the cannabis industry legalization overview, click here.

A handful of cannabis companies now make over $40 million in revenue. Cannabis businesses have already begun to understand that it is important to establish a brand story that is told consistently across all their customer touch points.

This video is based on a brand success story of a Marijuana Company – Solstice, which was the first commercial supplier of medical cannabis in Washington State back in 2011.

3) ALL EYES ON CALIFORNIA, HERE IT COMES

California was the first state to legalize medical marijuana in 1996, and then it became even more pot-friendly in 2016 when it was made legal to use and carry up to an ounce of marijuana.

California is making the largest legal U.S market and a magnet for cannabis entrepreneurs.

Even the great boxer/celebrity, Mike Tyson is on the verge of becoming a heavyweight contender in California’s burgeoning marijuana industry.

Tyson is looking to capitalize in a big way as he says he will have the ‘Best Marijuana Around!’

California’s cannabis industry is expected to be a $7.5Billion business in an upcoming year. It will be interesting to see how that goal is achieved in the state and how the industry evolves over the next two years.

The surge of new, inexperienced customers will boost the growth of low-dose edible product says, Bingham.

On March 2nd, a new concept of mild cannabis was gaining popularity ie Marijuana for moms. This has become socially acceptable as more moms are using marijuana to deal with common motherhood issues like daily aches, stress, to postpartum depression & anxiety and menstrual cramps.

5) EDUCATION REGARDING CANNABIS IS IN GREAT DEMAND

As new consumers are entering the market, they are hungry for in-depth cannabis knowledge. Experts & even teachers are educating people with details on the cannabis industry. Everything is being explained from usage to cultivation & even sales.

Here in this video, Californian’s are getting educated on marijuana

Students are getting educated by their teachers regarding cannabis, within the college itself.

6) THE ALCOHOL INDUSTRY WILL BE CHALLENGED BY RECREATIONAL CANNABIS.

Competition for customers between the beverage industry and marijuana startups is cranking up in California.

OutCo commissioned a large study at the end of 2016 on cannabis use in California, revealed that 51% of millennials are replacing alcohol with cannabis.

“Alcohol companies are laying the groundwork for partnerships,” says Vander Veer. In 2017, Constellation Brands, the producer behind big names like Corona, invested $191 million in a Canadian cannabis company.

On 19th March, a startup called ‘California Dreamin’ wants to replace booze with the Marijuana soda.

The startup California Dreamin is serving up an alcohol alternative which is delicious, all natural cannabis-infused sodas for a light social high, that still gets you lit, but without the same hangover or health issues.

Each bottle contains 10 milligrams of THC — an industry-standard dose of the psychoactive chemical in marijuana. The company only uses Sativa, the more energizing, euphoric type of pot, compared to the more body-relaxing Indica variety. Bottles come in other flavors, like tangerine, grapefruit and cranberry apple, and will retail for about $8 to $10 each. Cases are rolling out to recreational dispensaries in San Francisco, such as The Barbary Coast, over the next week.

To know more about 5 popular marijuana app models you should invest in 2018, click here

Own your own custom marijuana delivery app – BongMe
Click Here