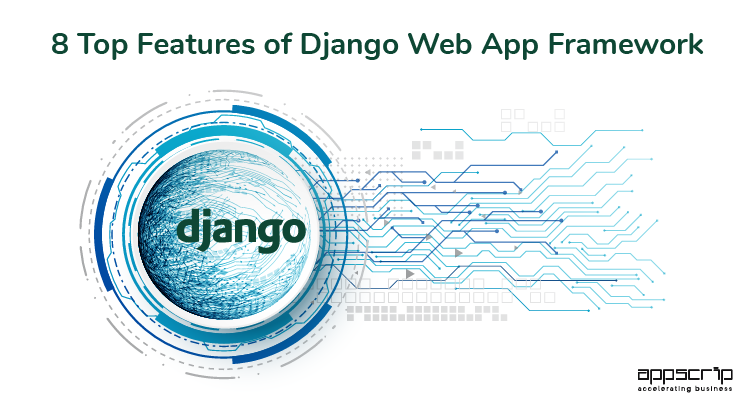 was originally designed for news sites since it lets developers write database-driven web applications, without having to start coding from scratch.

Django 2.0 has been developed to be “the web framework for perfectionists with deadlines”.

Before we get into the answer, let us understand what web application framework is:

Django’s primary goal is to ease the creation of complex, database-driven websites.

But why do we require a Django framework?

Let us take an example of a Mailbox.

The mailbox (port) is monitored by a web server for incoming letters (requests).  which it(web server) has to read and then send a reply with a web page having desirable content in it.

Now the question is, where do you get the content from?

Django is something that helps you to create the content. Each incoming letter is encountered as a JSON request which is then processed, post data authentication & verification from the associated database, a JSON reply is triggered in which the content is embedded and sent out to the mailer in the form of a web page.

Apart from Django’s pragmatic approach for faster turnover of concepts into applications, Django has more to offer you.

The Django is a highly recommended framework as a starting place for new Python web developers because the official documentation and tutorials are some of the best resources for someone to quickly grasp the Django framework.

Python is arguably the easiest programming language to learn. It is platform independent as it runs websites and is used in desktop applications on PCs, Macs, mobile apps and embedded in many devices.

Batteries-Included philosophy inherited from python where the common functionality for building web applications should come with the framework instead of as separate libraries. Say, for example, authentication, URL routing, a template engine, an object-relational mapper (ORM), and database schema migrations (as of version 1.7) are all included with the Django framework.

Free Flow feature of Django comes with the privilege that when you create an application, Django adds no boilerplate, cruft or unnecessary functions. There are no mandatory imports, no required third-party libraries, and no XML configuration files.

Built-in Admin of Django provides you with a customizable and extendable administration interface for working with your models and managing users, user permissions and groups. The model interface immediately replaces the need for a separate database administration program for all but advanced database functions.

With very simple changes to your admin configuration, you can organize your model fields, show & hide fields, sort, filter & arrange your data to maximize your efficiency. The admin also has an optional model documentation feature that provides automatic documentation of your models.

Scalable as Django uses MVC(Model-View-Controller) architectural design that allows you to run separate servers for your database, applications and media easily, have your media served from a Content Delivery Network (CDN), cache content at multiple levels and scopes. For really big sites, employ clustering and load-balancing to distribute your website across multiple servers.

Packages is a popular feature of Django which are numerous.  It comes with a wide variety of packages that suits your application requirements.  A quick tour of popular packages:

Stable releases with first production release in 2008 (version 1.0) and has had three Long Term Support (LTS) releases—1.4, 1.8 and 1.11. LTS versions are released with a guaranteed (typically three years) support period. In this period the codebase is guaranteed to remain stable, with patches for bugs, security and data loss 100% compatible with the feature release.

Here are some renowned sites built with Django :

The huge Django space is still open for more to be explored and if you are looking for a faster responsive API or a CMS panel for expert data management of your application to leverage your business to the next level, Appscrip is here to handhold you for the next big thing.