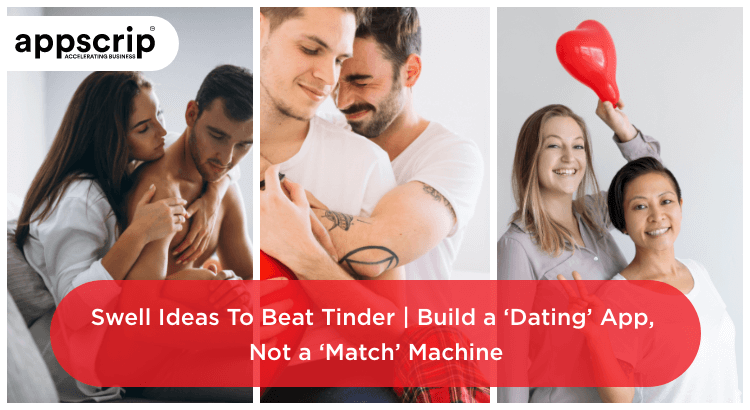 Build a Dating App, Not a ‘Match’ Machine | Ideas To Beat Tinder

What is the most satisfying, fulfilling and most sought after feeling or emotion in the world?

Love and Business are contradictory terms but someone has to make a business out of it right?

Ultimately it serves a dual purpose : To make people meet and make them fall in love is a divine. Second it will generate revenue and a prosperous business based on how good the dating model is.

There are a dime a dozen apps in the market for dating. Some of them have been successful in their quest of making people match and meet. But somewhere along the way greed took over and this has led to a lot of heartburn.

E.g. Tinder manipulated its algorithm to ensure that people start shelling out bucks to get a date. Forums and app stores have been flooded with complaints about Tinder.

It’s just a matter of time before it loses and will be replaced with a much more sincere, yet revenue churning app. Someone will wise up on Tinders game and build a dating app that actually helps discover true emotions.

Are you willing to do it? Will you be the one who will challenge Tinder and its clones?

If yes, read on and find out how you can do both i.e. get people to find their ideal date and make money on the way.

Making dating a game – People who live stream their video get rewarded beans or coins by the viewers. Why shift the focus from dating to gaming?

Build a Dating App, not a “Matching” App

Dating apps have failed in their mission. They are good at matching you with another person. But what after that?

They fail miserably to create an experience outside of the app. Empty matches lie there wasted. It must be their quest to make actual meaningful connections between two individuals. People need to get off their couch and set up an actual date. The important asset here, is the person – the date.

Focus on creating a wholesome experiences outside the app; not within. Be creative.

Build a dating app that has a mission to build relations, not a mechanical robot that mindlessly matches people.

After matching people, suggest locations and enable reservations to meet. Tie up with gift shops, flower shops, restaurants, eateries and coffee shops. Prompt the matches to send each other gifts or meet at a restaurant or coffee shop. Build a dating app that goes out of its way to unite people.

Suggesting locations or shops can bring in advertising revenue. Reservations can bring in a fee per transaction which is paid by the business or venue.

Such a feature can delight your users, bring more customers for the partners and soar your revenue.

Spread it around College Campuses

When you launch a dating app the audience is limited initially. The key is to get as big number of people on your app. So what do you do? Meet students on campuses. They are like minded and a willing base of users. Organize a donuts corner and offer each student one if they install the app. Offer them paid internships at your company if they manage 1000+ installs. Build a dating app and market it to the right people in the right places.

Go to concentrated community like events, concerts, perhaps weddings even. In such places you can market to users at a fraction of the cost.

A single woman in Los Angeles downloads the app and views the limited pool of potential daters. She logs out. She signs in two weeks later and the pool still only includes the same people that were there weeks before. She deletes the app.

Downloads mean very little if there is no retention;  The success of your dating app will lean heavily on how you launch it and how you market it.

Start by launching in one city. Penetrate that city as deeply as possible so that daters can access a large pool of potential matches. Once successful, scale into another city and then throughout a region. The more buzz you create, the user adoption process becomes easier.

Reward on Finding a Date

Run a campaign. Have couples upload a picture of their date. Each month reward a couple in whatever form possible.

So go on. If you want to foster love, build meaningful connections and help people find their loved one, build a dating app that does so.

[sc_fs_multi_faq headline-0=”h2″ question-0=”Do you think Tinder is bad for the dating world?” answer-0=”Yes it is bad for the dating world especially if you consider yourself as unattractive man or a beautiful woman. An ordinary looks guy might get like 2 or 3 matches leading to nothing. The attractive woman can have from 10 to 100, or maybe a 1,000 matches She pulls together thousands of matches and after a while, she gets exhausted of seeing the same recycled and googled pick up lines. In the bargain she loses out on genuine good guys who get tossed aside.” image-0=”” headline-1=”h2″ question-1=”Has Tinder lost its spark?” answer-1=”The reason a Ferrari seems too attractive to people is that it’s hardly attainable and scarce. If Ferrari cost was that of a normal car every one in the neighbourhood would own one and it would lose its appeal. This is exactly what Tinder is doing to people’s brains. When you get so many options and when you become able to change the option by just swiping away then suddenly people become much less interesting. This is causing dating fatigue.” image-1=”” headline-2=”h2″ question-2=”Does Tinder lower self esteem?” answer-2=”Compared to people who weren’t on the dating app, Tinder users had lower levels of self-worth, reported being less satisfied with their faces and looks and were more ashamed of their bodies. They were also more likely to think of themselves as sexual objects” image-2=”25647″ count=”3″ html=”true” css_class=””]