Cameo Business Model: Reach Out To The Stars

Cameo is a popular online platform that allows users to get celebrities and create personalized videos at given prices.

Cameo also allows these users to chat with celebrities through Zoom calls and personal chatting systems.

The primary way Cameo makes its money is by taking a 25 percent cut through every user transaction on the platform. This Cameo business model has worked wonders for them, and hence they are such a big and popular startup currently. 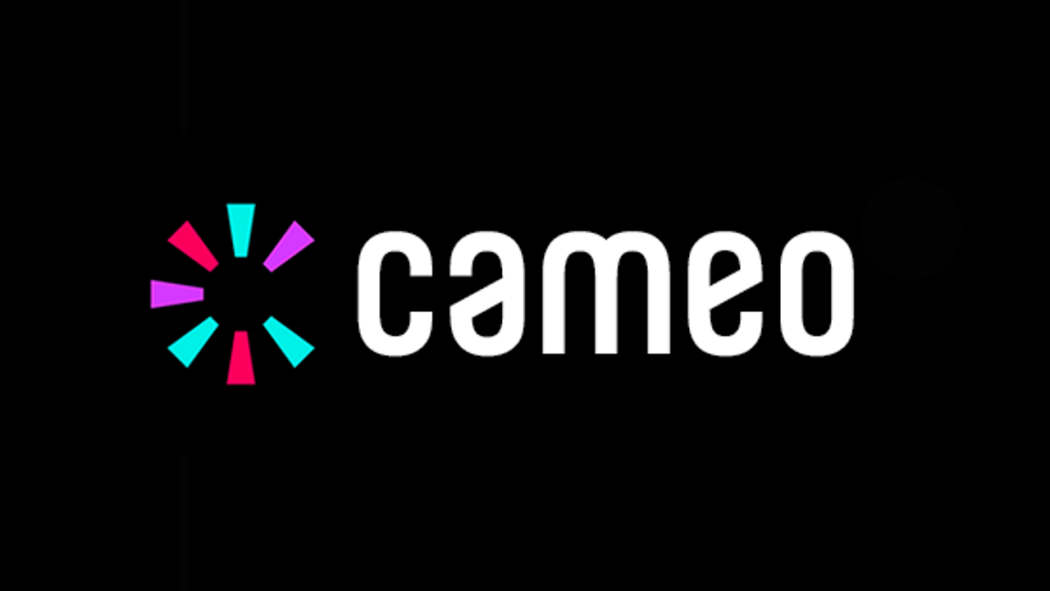 Now let us know what Cameo is, how it works, its revenue model, and other details.

How does Cameo Make Money?

Every user can select a celebrity to interact with; they have their pricing set on the platform. The pricing starts from $5 and reaches up to a thousand. At this point, the costliest interaction is with Caitlyn Jenner, whose one personal shoutout costs a whopping $2500.

Apart from that, Cameo makes money directly from its online marketplace, where they charge a 25 percent cut from every transaction made by the user.

The other one was chatting through texts with the celebrity of choice. Though the chats are restricted to only 250 characters, Cameo has put a reasonable price tag on it.

Cameo attracted considerable success after launching these new features and broke out from the stereotypical platform of allowing users to get personalized videos from celebrities. Initially, Cameo struggled with customer acquisition. 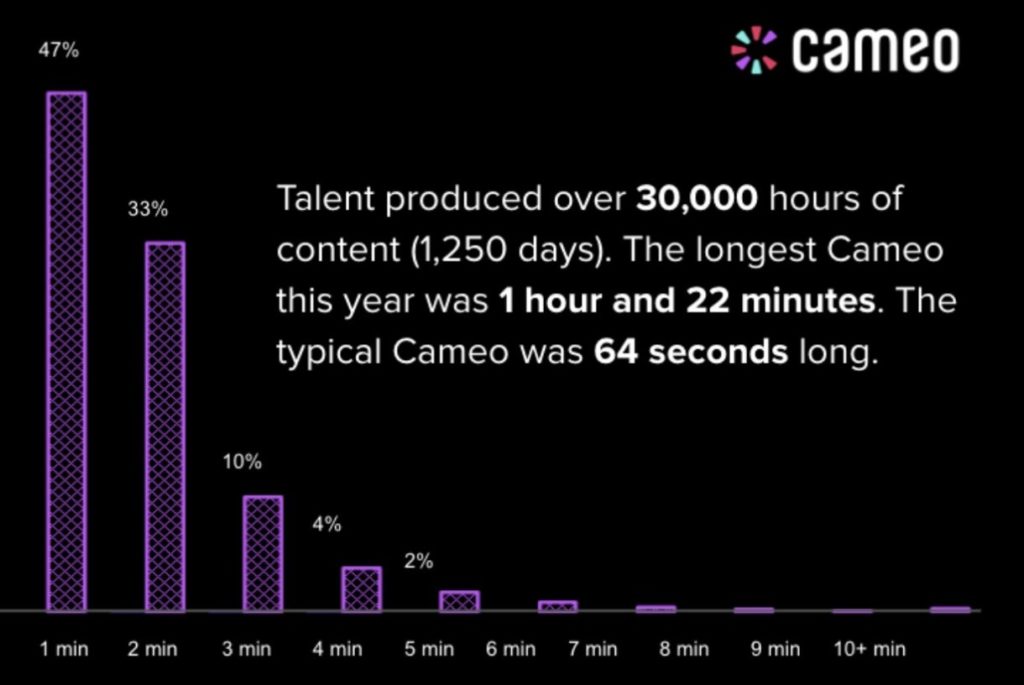 After it was established in 2016, Cameo has gone for seven capital funding. In those seven rounds of capital funding, the company managed to raise a total of $65.2 million. Some of the top companies and angel investors have invested in this business.

In June 2019, Cameo performed its last round of funding. Cameo put forward a whopping valuation of $300 million in that round, which attracted the necessary funds to grow and penetrate more into the digital marketplace.

According to a blog post released by Cameo in 2021, they generated roughly $100 million in 2020 through GMV or Gross Merchandise Value. GMV accounts for the total services sold based on a C2C (Customer to Customer) or eCommerce business model.

When we calculate the 25% charge cut from every transaction, the estimated annual revenue generation stands at $25 million.

When the yearly revenue is compared to the valuation they put forward during their last round of funding; the startup made good progress. They also reported that their company showed a rough growth of 4.5 times per year.

How does Cameo business model work?

As discussed earlier, Cameo is an online platform through which users can interact with various celebrities in real-time. Users can use it through the website or the mobile application available on app stores.

Users can select from a broad range of celebrities on the platform and pay different prices to interact with them.

Once the creator is chosen, the user needs to fill out a form to specify all the necessary details like the need for the video, the content within it, the occasion for filming it, and provide any additional instructions if required.

You can either ask for a promotional or a personal video, whereby the creator has seven days to film it. Depending upon the instructions provided in the form, the creator has complete freedom to accept or decline the request for a video.

Users can also interact through Zoom calls and personal chats with the celebrity of their choice.

Since its inception in 2016, Cameo has been catering to over a million users with over 30,000 creators on the platform.

As mentioned earlier, Cameo business model boasts 30,000 active creators on the platform. Out of these 30,000, almost 150 of them have been consistently earning around $100,000 every year. One of the top earners from recent times is Brian Baumgartner. He played the role of Kevin Malone in the famous sitcom The Office. 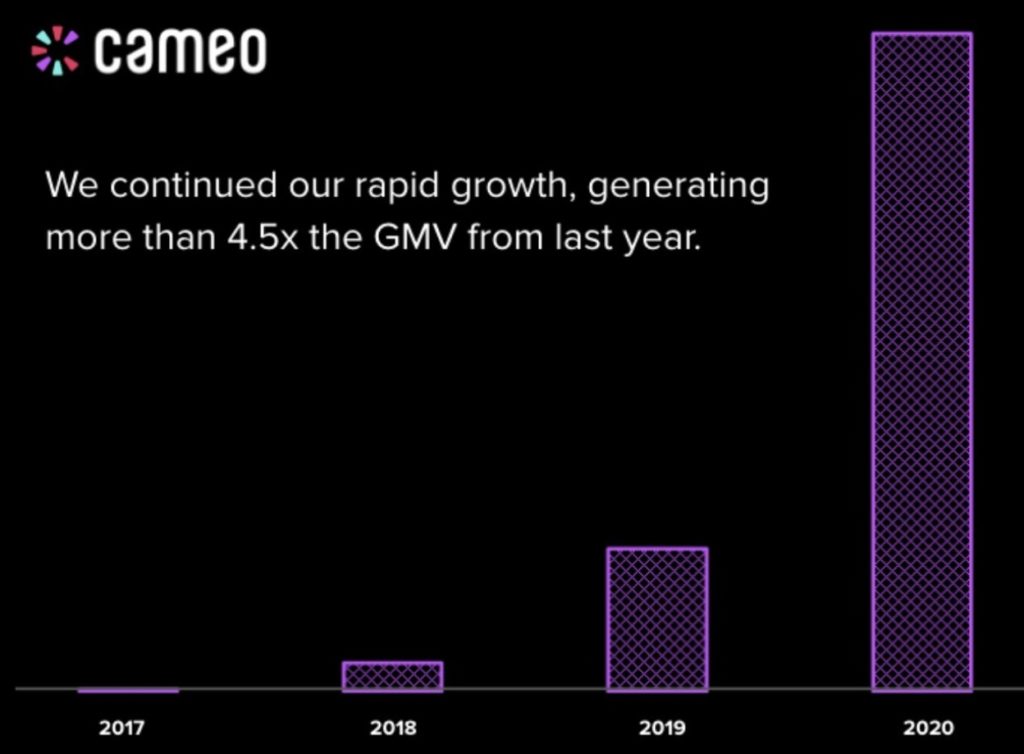 This list is enormous since more than hundreds of creators make a good fortune every year through Cameo. Most of them make money through personal shout-outs.

How much Commission does Cameo Take?

As discussed previously, Cameo charges a 25% cut from the total amount for every transaction made by a user. For example, if the user makes $100, Cameo would charge $25 as their service charge. This is the main part of how they earn their revenue.

As per the reports, 75% goes into endorsing and paying the celebrities, looking after marketing and other tasks like app and website development, maintenance and much more.

Cameo has shown extreme growth and development since it was established in 2016. With over 30,000 creators currently working on this platform, users are intrigued more than ever to use this platform.

As mentioned in the initial part of this article, there are over one million satisfied users. More and more users are joining in every day to avail of the excellent services provided by Cameo. With this valuation, Cameo is set to dive into new genres and rule the digital marketplace.