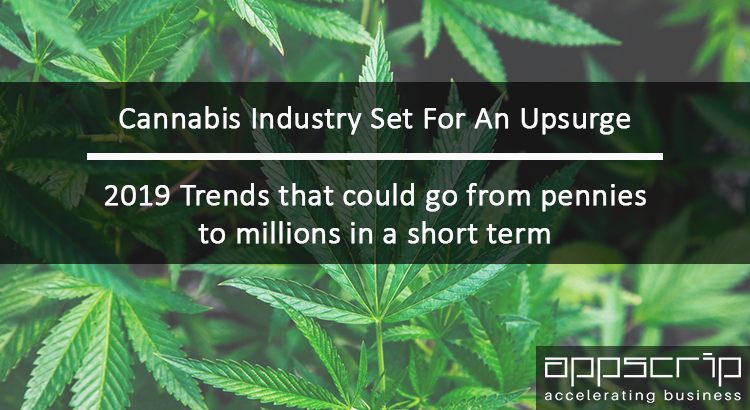 Cannabis is coming out of the closet!

It’s fast shedding its old skin as an underground drug that gets you high to being something that offers relief and wellness. It’s unique because it has both medical healing properties and recreational capabilities. No other drug has the kind of colorful history that marijuana has achieved.

Legal cannabis commerce will become a dynamic and entrepreneurial field for 2021. We take a look at the top cannabis trends 2021 that are bound to change the landscape of the Cannabis business.

Legalization would lead to acceptance

The world is fast changing and becoming open to everything that improves the lives of its citizens. In the US, medical marijuana is legal in 29 states. Recreational use of marijuana is also legal in 10 states and Washington D.C. The numbers are likely to grow given the shifting legal landscape and softening public opinion.

As Canada undertakes its freshman year (2018) of legal recreational cannabis, other nations watch closely.  Adoption by Canada will be instrumental in providing a tremendous boost to the image of Cannabis. It’s the second country to do so after Uruguay legalized it in 2013.

The United Kingdom, classed by the UN as the world’s largest producer of legal cannabis, has started allowing cannabis-derived medicinal products for the prescription. Other markets repeatedly show that medicinal use is the first step towards greater acceptance.

Marijuana is abandoning its pothead, gateway drug reputation and becoming something more modern, refined and premium. Until now alcohol has been the social lubricant but Cannabis is set to replace it after due legalization. 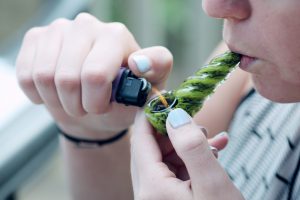 Marijuana will change the everyday design and remake public spaces as it attracts everyone from lawyers to truckers. From the beanbag to the more informal lounge chair it’s permeating all spaces. Women are organizing getaways for doing yoga, spa treatments and enjoying marijuana. Soon bars, restaurants, concert halls, and amusement parks will join in to incorporate the universal design language of cannabis.

Millennials are thronging to buy cannabis stocks at a fast pace, a time reminiscent of the cryptocurrency wave.

Cannabis stocks have produced massive gains and dramatic volatility, surging 78 percent in in Aug-Sept in 2018.

Millennials are abandoning alcohol for weed as they find it more soothing and they don’t have to deal with hangovers.

Cannabis products are increasingly targeting mothers in need of relaxation.

Women also use it to get through PMS and endometriosis.

Elderly Americans are the fastest-growing demographic for marijuana use.

In Colorado alone, cannabis tourism has grown 51% since 2014, according to a report from the state’s department of revenue.

It attracted 6.5 million cannabis tourists in 2016.

Estimates say that number will have grown by at least 6% in 2017 and will exceed that figure this year. Tourists logged nearly 18 million cannabis-use days in 2016. 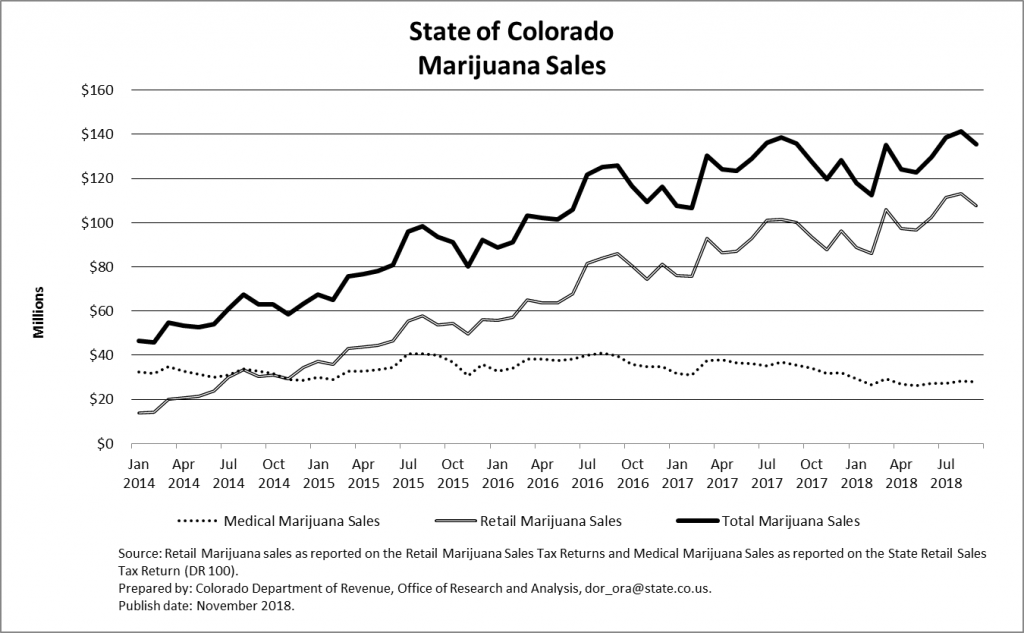 Variations of its usage

You don’t have to get stoned to reap the health benefits. New delivery methods emerge.

Consumers inhale, swallow and slather cannabis products. Transdermals can be placed as patches on a body part.

Ingestible oils is a cannabis concentrate that is taken orally. These come in capsules or plastic applicators, either of which can be consumed directly or added to food or drink.

Pot brownies are a classic example of a variation, but a variety of infused candies, snacks, and ingredients can be found for cooking your own treats.

Drinks infused with weed are nothing new. You can also brew up a cup of marijuana tea or cannabis coffee right at home.

Alternative forms of delivery systems are expected to increase more as scientists explore the plant in greater detail.

Cannabis will be packaged in easier-to-consume ways, whether it’s pre-dosed, or paired with other products like wine.

Cannabis lattes at your local cafe, Designer one-hitters on the living room table, Weed drops in the office; the world is taking a re-look.

Experiential packaging will enable experiencing the cannabis product.  The next thing in packaging would be with regards to keeping it child-proof.

Pot’s getting pretty cool in the mainstream markets. Celebrities are jumping feet first into the Green Rush.

The global cannabis market is valued at about $142 billion in comparison to a coffee market valued at $80 billion per year. Cannabis is considered the largest cash crop in the U.S. and has a growth rate far larger than corn, cotton, and wheat.

As of 2015, an estimated 9.5% of adults used marijuana, almost double the rate of a decade before. 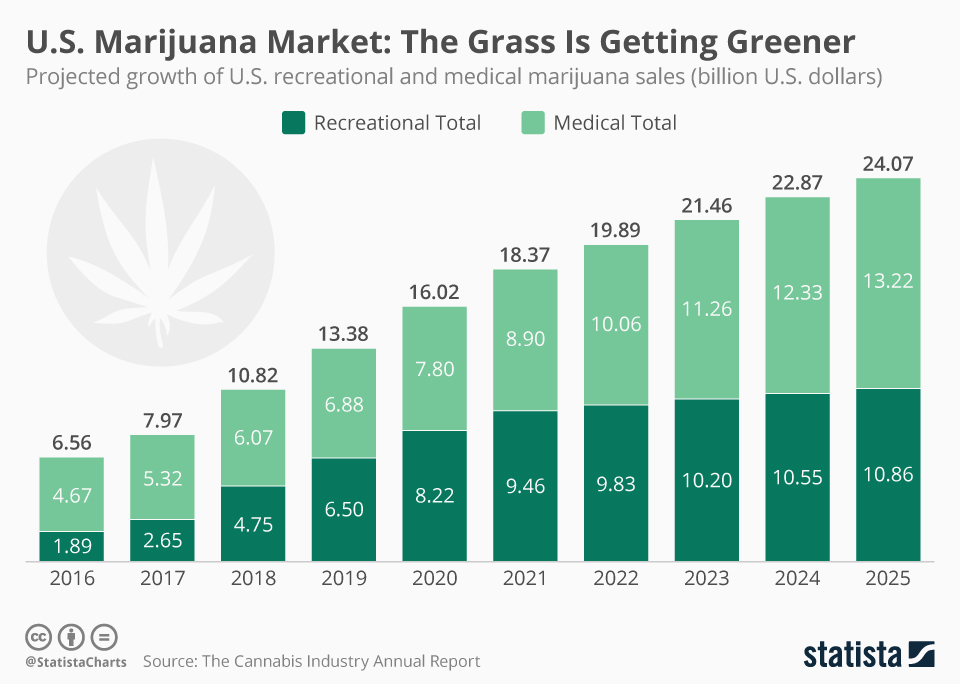 Check Out: 5 Popular marijuana app models you should invest in

Average marijuana user spends $647 on legal purchases of the drug annually. Its tiny compared with the U.S. alcohol market, worth around $58 billion a year.

Eaze and GreenRush are leading from the forefront of medical marijuana delivery. However, there’s a growing stable of startups like “Uber for weed” or the “Amazon of cannabis.”

Baker, the CRM, and marketing automation platform for dispensaries are active in more than 1,000 dispensaries and with over 1.2 million customers across the US and Canada.

Flowhub is the green standard in seed-to-sale tech and helps bud tenders manage products and discounts in dispensaries, and generates data visualizations and reports. The startup has $3.8 million in total funding and continues to expand to more dispensaries.

The cannabis market is both very young and increasingly volatile. The rewards could be high, but so are the risks, making pot perhaps the ultimate investment opportunity that exists today.