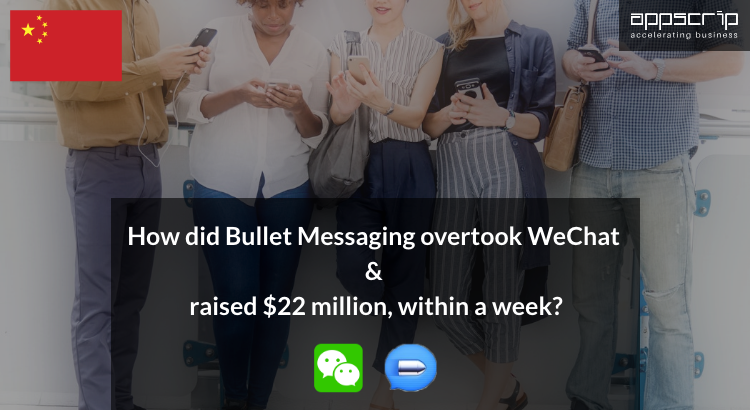 How did Bullet Messaging overtook WeChat & raised $22 million, within a week?

Bullet Messaging, the new found strong rival to China’s WeChat, is doing its round around the internet for over a week now.

To understand why Bullet Messaging getting ahead of WeChat is such a big deal, we need to understand little bit about both the applications:

WeChat was launched way back in January 2011.

WeChat is also called as Weixin in China

WeChat has over 1 billion monthly active users who chat, play games, shop, read news, pay for meals and post their thoughts and pictures on the app.

You can say WeChat is an inseparable part of China’s lifestyle.

Bullet Messaging is less than half a month old, its officially launched on 22 August 2018.

Bullet Messaging, developed by a startup called Kuairu and backed by Beijing based smartphone maker Smartisan, managed to seal their first week by making $22 million.

How did Bullet Messaging managed to raise $22 million in just a week after its launch?

Here is a complete picture of the entire situation.

Every business is bound to face economic cycle(Expansion-Peak-Recession-Depression), WeChat was no exception to this.

A Mobile company Tencent, which is backing WeChat has recently lost about 26% of its share price.

Some assume its reason to be Tencent’s idea of growth through investments rather than innovating and incorporating new ideas , as per their initial agenda behind the WeChat app.

With the company backing WeChat, loosing its share price, sets WeChat in a little unstable position.

The launch of Bullet Messaging has further disrupted WeChat’s market position by ranking as most downloaded social app in China.

Here are the features that Bullet Messaging is offering to its customers:

Users in China are surely giving a green signal to these features provided by Bullet Messenger.

Smartisan’s CEO Luo Yonghao  has completely denied the speculations of rivalry with WeChat, by stating that Bullet Messaging is nowhere focusing to compete WeChat, rather they are focused on targeting a particular group unlike WeChat.

Another point in support of his denial to competition is that Bullet Messaging only covers instant messaging whereas WeChat offers multiple services to its users.

Even though Bullet Messaging publicly denies competition with WeChat, it is incorporating Alipay in its app,  the biggest competitor to WeChat pay.

Although Bullet Messaging is in news for raising huge funds, they are under fire for other things as well.

Bullet Messaging is not just turning heads for raising sum of $22 million in a week. It is getting a lot of attention because of following issues in the app:

Matthew Brennan, Speaker and writer focusing on Chinese mobile technology and innovation, about his first impression of Bullet Messaging app

WeChat is an experienced and one of the most used instant messaging app in China. It is going to take lot more than making profits real quick to overtake this well established social application.

All the hassle caused by Bullet Messaging in China’s social media application market proves that, the market in China is still full of potential and is open for new chat application startups to enter & explore the market.