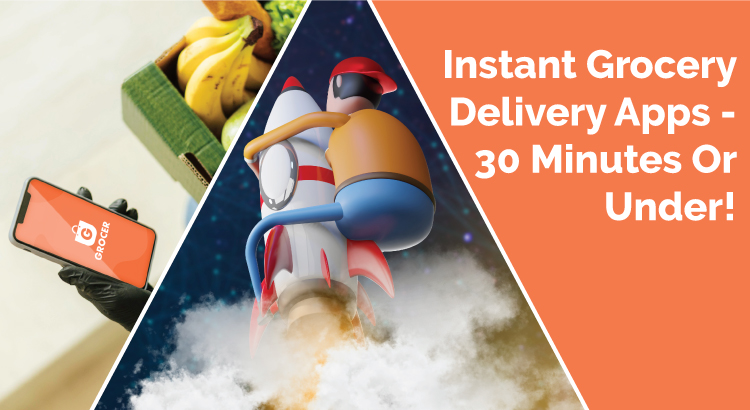 A raft of new instant grocery delivery apps, backed by billions of pounds in Silicon Valley venture capital, is now looking for a slice of the action.

Rapid Grocery apps like  Getir, Gorillas, Dija, Weezy, Zapp, Fancy, Jiffy and Beelivery have attracted more than £5 billion of funding in this year alone, with investors in London and Silicon Valley betting big on the sector’s future.

How Did The Instant Grocery Delivery Trend Start?

It’s this delay that a raft of ‘instant grocery’ apps seek to exploit – ‘we’re faster than you’ is the slogan of Berlin-based Gorillas, which boasts of its ability to get groceries to you quicker than you can pop out to the shops.

Instant grocery delivery apps are also hoping another feature will work in their favour: convenience.

‘As a customer, you can now have groceries kind of fit around your life rather than the other way around,’ says Alec Dent, co-founder of instant delivery app Weezy.

The potential for enormous profits, targeting a mishmash of busy young professionals and spontaneous or lazy shoppers, has attracted reams of venture capital money.

Online grocery has been a growing trend over the last decade, but Covid accelerated the realisation that lots of parts of the model are just broken.

Supermarkets have struggled to make an online channel work for them, because the way that you build an online business is very different from the retail offering.

But the latest class of ultra-fast food apps have a different vision of the future. They are often defined by what’s called a ‘dark store’, small delivery hubs that aren’t open to the general public and dotted frequently around London, to maximise efficiency and cut down on delivery times.

These ‘dark stores’ only stock a select offering of popular items, but the grocery apps are betting that the core products are bought frequently enough that customer won’t miss more niche items.

The idea of distribution centres solely to serve a delivery app’s customers also isn’t new – ghost kitchens, which proliferated in the wake of Deliveroo and UberEats’ success, popped up in un-used warehouses and empty industrial parks, in order to serve customers in greater volumes than traditional kitchens allowed.

But with the ‘rapid delivery’ apps owning the warehouses, they’re betting they can beat traditional delivery apps on speed with efficient packing processes – most ‘instant delivery’ apps promise to get you your food within half an hour of ordering from your phone.

Talk of ‘efficiency’ and ‘convenience’ in the startup world has alarmed some observers, after similar goals led to the rise of the so-called ‘gig economy’, an economy of workers without contracts who only get paid for each delivery, ride or ‘gig’ they make.

While startups like Deliveroo and Uber claim that the gig economy is good for workers seeking flexible work, without a contract, workers’ rights unions have criticised the model as denying staff full employment rights and treating workers as disposable.

The most pressing question for many of the startups vying for a seat at the delivery table is whether they can last.

Some investors are more optimistic about long-term prospects, though, arguing that just as the UK supports a wide range of supermarkets – Tesco, Waitrose – so the new delivery economy will support a variety of new apps.

If the apps do succeed, then, what will that mean for the fate of the local corner shop?

Industry insiders think that, rather than make life difficult for corner shops, it’s instead the Sainsbury’s Locals and Tesco Expresses that will suffer.

Corner shops are still going to be useful if you want to grab one or two items, the structure of these apps is not to encourage a two item order.

Most convenience stores have very small average transaction values. The delivery app orders are much more likely to take on supermarkets and their local chains.

The lead investor in today’s funding round is Carrefour, the supermarket giant. Carrefour’s investment isn’t just a financial investment. Cajoo will take advantage of Carrefour’s purchasing organization. This way, Cajoo will be able to offer more products to its customers.

On the French market, the startup competes with Getir, Gorillas, Flink, Dija and a few others. It also indirectly competes with traditional retailers and their online ordering systems.

“It’s a category that is incredibly capital intensive,” co-founder and CEO Henri Capoul told TechCrunch.
“We own the entire value chain. If we want to expand, we have to launch hubs, we have to buy products.”

While Henri Capoul expects some sort of consolidation down the road, the company is doing everything to remain a big, independent company. “European champions will be national champions first. Right now, some players can overcome a lack of products with discounts. I’m convinced that the future of this category will be represented by three or four local players that are strong in other countries.” Henri Capoul said.

Cajoo is currently the only French company operating at this scale in this category. So it’s clear that the company sees itself as a market leader in France first. But the company is already looking at other markets as well — Belgium, Italy, Spain, maybe Portugal or Eastern European countries.

Wuplo, an on demand QCommerce eGrocer got started in Berlin and wants to expand!

And another grocery delivery service, this time with Russian roots: Wuplo launched its website yesterday in Berlin. From a warehouse with 5,000 products in Charlottenburg, the usual tight delivery times apply: 10 minutes within Charlottenburg, 30 to 60 minutes for the rest of the delivery area (“all of Berlin”), whereby 10 minutes are also announced here. Alternatively, customers can set a 15-minute time window. According to the legal notice, Wuplo is backed by First Mile Delivery Solutions GmbH. The press release names Ivan Vorontsov and Schetinin Sergey as the founders – both have been in Moscow with the “Family Friend” delivery service since 2016. They announce variable delivery fees (one to 2.60 euros), zero waste delivery and expansion into other cities.

Delivery Hero SE (“Delivery Hero”), the world’s leading local delivery platform, announced in August a new peak of orders from its Korean subsidiary Woowa. As the operator of the largest online food delivery platform in South Korea (“Baedal Minjok” or “Baemin”), Woowa delivered 100 million orders in August 2021. Delivery Hero is particularly proud of reaching this record as it is yet another proofpoint of the high potential of the Korean delivery market and underlines Woowa’s strong operational performance.

Benefitting from both a large pool of tech talents and an innovative mindset, Korea is at the forefront of pushing the boundaries of the delivery industry. Together, Delivery Hero and Woowa have been heavily investing in ramping up own delivery (“OD”) in South Korea, and the share of OD orders already doubled to 8% in June compared to February with Seoul now reaching as high as 29%. The company will continue to expand this service to new cities and aims at reaching an OD order volume of 15 million in December.

If you are thinking of launching a Grocery Delivery Service, you need a ribust app that will help you deliver under 30 minutes or even 15 minutes. Talk to us and find out how.

1 thought on “Instant Grocery Delivery Apps – 30 Minutes Or Under!”