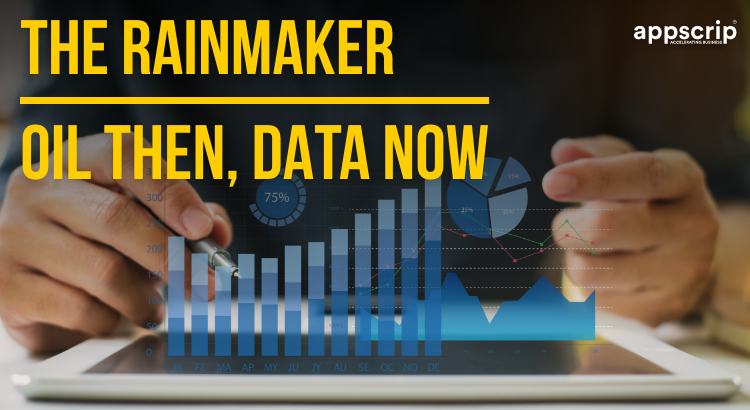 The Rainmaker | Oil then, Data now

Once bitten twice shy. Tough lessons learned paying a high price is not forgotten in haste.

In 1882, these various companies were merged into the Standard Oil Trust. They went on to control nearly 90 percent of the US refineries and pipelines. Rockefeller built his oil monopoly by callously eliminating his competition to become the richest man in the world.

The largest consumer of oil in the world is the US. Hence it is evident that if the reins of oil remained in the hands of few people, they would rule the prices and the distribution. The U.S. government brought a suit against Standard Oil Company in 1906 under the Sherman Antitrust Act and in 1911 they were ordered to divest their major holdings.

The analogy of Oil & Data

We are now at a stage when history could repeat itself. Rockefeller built a monopoly in oil and became the richest world-over. Now data is a resource being targeted, collated, and deciphered by a few firms to rake in green-backs. They are – Alphabet (Google’s parent company), Amazon, Apple, Facebook, and Microsoft. They collectively earned over $25 billion in net profit in the first quarter of 2018.

In most metros, high-rise buildings have a store in the basement to provide goods to the residents of the building in a jiffy. The store personnel are in the know as to who needs what kind of products or service. He thus ensures to have stock of these, because he is privy to it and uses it to his advantage. Therefore he could set a price on the said goods/service as the resident depends on him for fulfillment.

Now take this analogy to the next level as to how a browser would capitalize with information that passes through it. Every activity creates a digital trace such as booking for a movie, watching a show on Netflix, or searching for some information, this is fodder for the data distilleries.

If you have searched an airline for flight info or a product on the Net, then for the next one month the browser comes up with information on all flights to that destination. If it’s a product, then it comes up with numerous advertisements on the product you had searched for.

This very clearly indicates that the data mined from the browser is being used for economic gains by the company that set up the browser. Access to data cloaks companies from the competition.

Google knows what people searched for, Facebook what they shared, Amazon what they bought. They own app stores and OS and lend computing power to start-ups. They have a “Bird’s eye-view” of activities in their niche.

They know when a new product or service begins to gallop, giving them the option to either copy or buy out the competition before it becomes a threat.

Facebook’s $22 billion purchase of WhatsApp in 2014 with 60 employees falls into this classification of “acquire-the-threat” to eliminate potential rivals. Data can stifle the competition by providing early warning systems and hindrance to entry.

Antitrust regulators monitor the distribution of economic power in business, to ensure healthy competition is permitted to flourish and economies may grow. Antitrust laws apply to most industries, touching every stage of business, such as manufacturing, distribution, transportation, and marketing.

Most countries have encompassing laws to protect consumers and regulate how firms should operate their businesses. The object of these laws is to ensure a level playing field thereby preventing some from attaining too much clout over the competition. Antitrust laws are also known as Competition laws.

These statutes developed by the U.S. government are to protect the hoi-polloi from predatory business practices. They ensure a fair competition exists in an open-market economy. These laws vigilantly guard against possible monopolies and disruptions to the vicissitudes of competition.

Antitrust laws prohibit business practices that inhibit trade. Such as price-fixing conspiracies, corporate mergers that cut competitive zeal in markets, and predatory designs that gain or hold on to monopoly.

In 2014 Google proposed an antitrust settlement with the European Commission. Google agreed to display results from three competitors for specialized searches related to products, travel, and food. But added that competitors would pay each time someone clicked on a specific result shown alongside Google’s results. They agreed to pay for an independent entity to oversee the system.

The proposal stipulated that content providers had the option to remove content from these search services without penalties. They then suggested conditions making it cumbersome for advertisers to remove their campaigns. But sites using Google’s search tool could show ads from other services. The proposal was not adopted for obvious reasons.

Such dominance has prompted calls for breaking up the tech giants, as Standard Oil in 2011. But the question is do we need such drastic steps. Their success has profited consumers. Such as Google’s search engine, Amazon’s one-day delivery, or Facebook’s news feed. The firms are still tepid as they interpret they are far from extorting consumers, on the contrary, the services are free.

Data as a Resource

Smartphones and the internet have made data valuable, abundant, and pervasive. Algorithms can envisage when someone is on the verge of buying a product, service a car or he is at risk of an ailment. GE and Siemens now depict themselves as data firms.

The abundance of data modifies the nature of competition. Technology giants have benefited from network effects, more users make Facebook lucrative for others to sign up. With data, there are other network effects. By collecting more data, a firm has further scope to improve its products, attract more users, generate even more data, and so on.

Self-driving cars provide invaluable data to Tesla to better its drive-ability. One reason why even though Tesla sold only 25,000 cars in the first quarter last year, is now worth more than GM, which sold 2.3 million vehicles.

The nature of data makes the antitrust remedies of the past archaic. Breaking up a firm like Google would not stop them from reasserting themselves. A radical rethink is required, such as:

Firstly – antitrust authorities need to think progressively. When considering a merger, they have conventionally used size to determine intervention. They need to take into account the extent of firms’ data assets when assessing the impact of a deal.

The purchase price could also be a pointer that an incumbent is killing an embryonic threat. Facebook’s willingness to pay $22 billion for WhatsApp, which had nil revenue, should have been an awake-up-call.

Authorities must become data-savvy in their scrutiny of market dynamics to replicate algorithms that scheme over prices on how best to endorse competition.

Secondly is to loosen the grip that online services have over data and give more control to those who provide them. As the Aadhar in India. The identification information is used by other agencies as well for the process of verification. Transparency would help, companies would be forced to reveal what information they gathered and how much they have monetized out of it.

They could mandate the sharing of data, with users’ consent—as Europe is endorsing by requiring banks to make customers’ data accessible to third parties.

Refurbishing Antitrust Regulations on data management will be cumbersome. Data sharing will entail risks that could threaten privacy. On the contrary, if governments don’t act on data concerns, the economy could then be dominated by a few giants.