143.9 billion applications were downloaded in 2021. Off these 55 billion were games and 88 billion were apps. 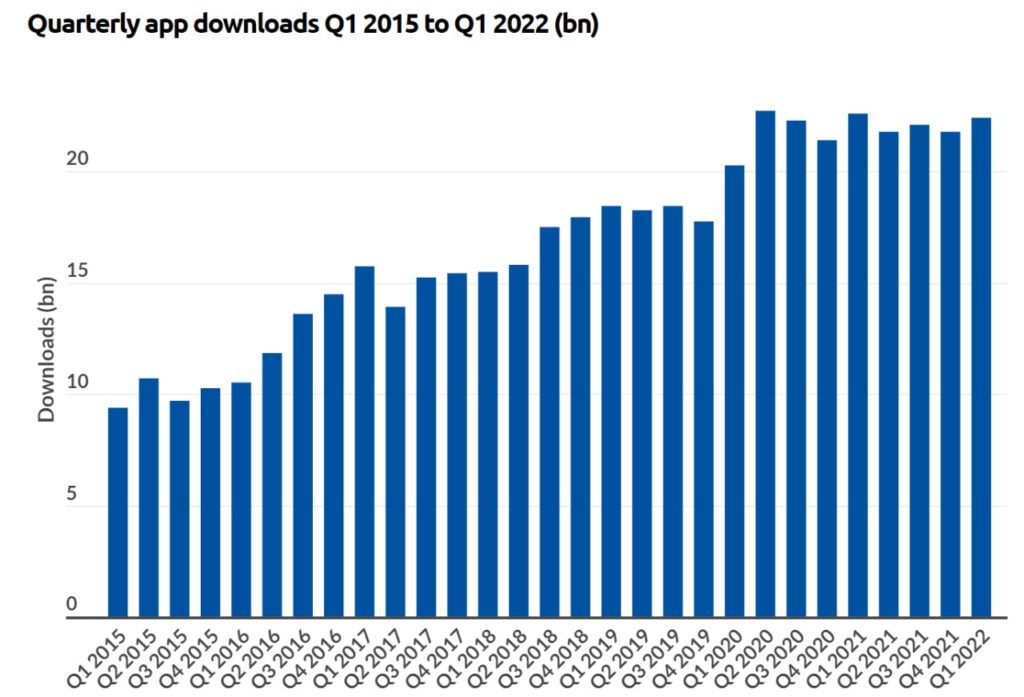 iOS App Store was launched in the year 2008 with 500 apps. Today, there are over seven million apps (games & apps put together) available across iOS and Android platforms.

The market for these apps continue to grow as every domain now demands an app for consumers to conveniently conduct business from any location. There are an estimated six billion smartphone users worldwide, with five billion of them having access to the internet.

Some popular apps such as Meta, WhatsApp, Alibaba and YouTube, have more users than the population of China. 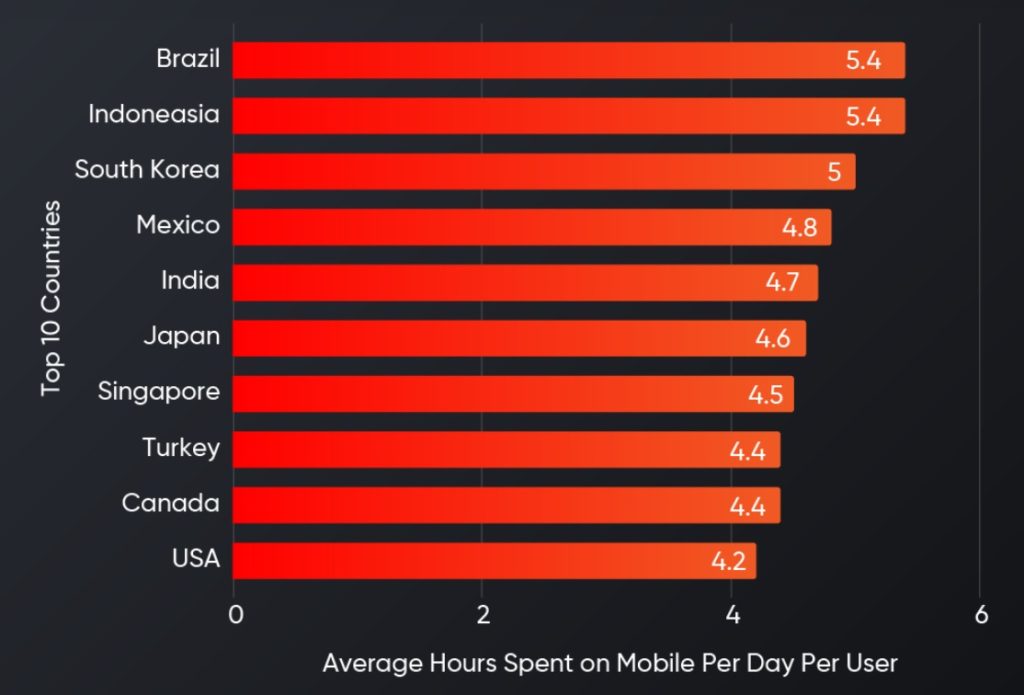 Smartphones are reaching ubiquitous levels of usage with the median penetration level for adults staring at 76%. In South Korea, 95% of adults own a smartphone.

Emerging economies like Brazil and South Africa have penetration levels of 60%. India lags with 24%, but that still represents millions of users.

The industry successfully coped with broad shifts in consumer patterns and user habits enforced due to the COVID-19 pandemic, including sustained lockdowns and social distancing. 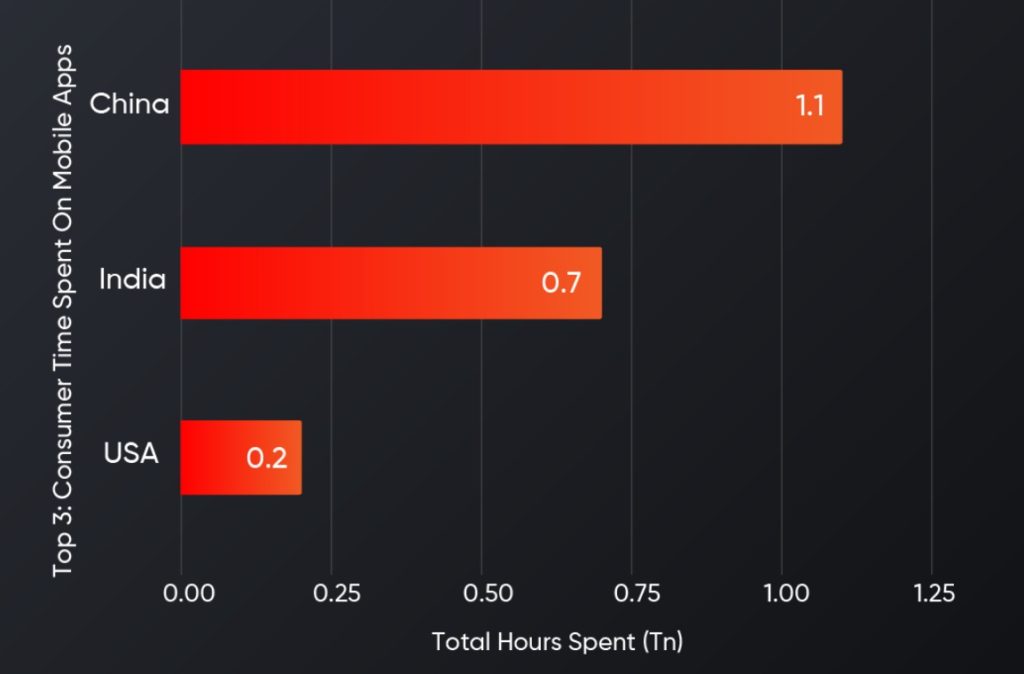 Despite such challenges, the mobile app ecosystem continues to thrive, demonstrating the robustness and adaptability of the app marketing industry.

This year the competition is fierce in most domains, but opportunities are immense. We have taken up a study of mobile application trends in the Fintech and the Ecommerce industry as these domains have seen the highest application of technology and have gained from it considerably too.

In here we have provided marketers with the insights needed to drive performance and comprehensive understanding of audiences via pragmatic data. 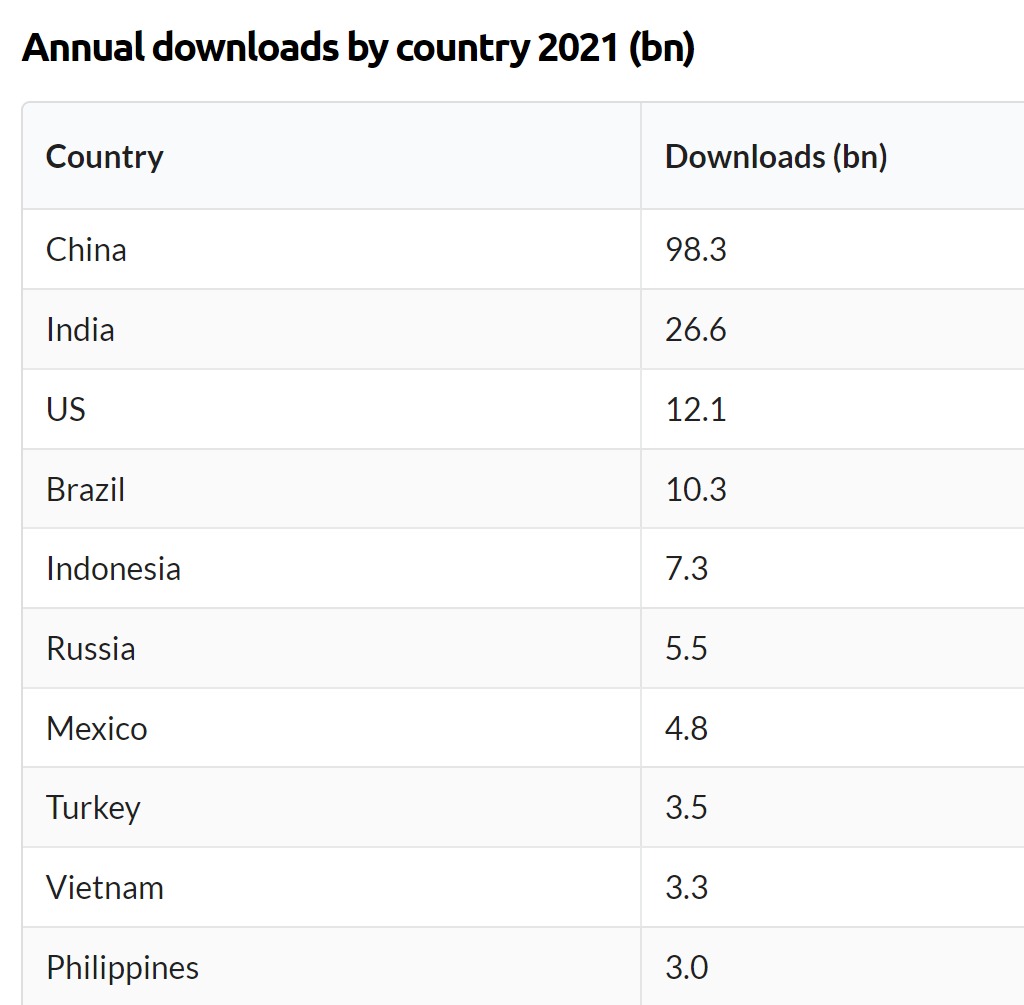 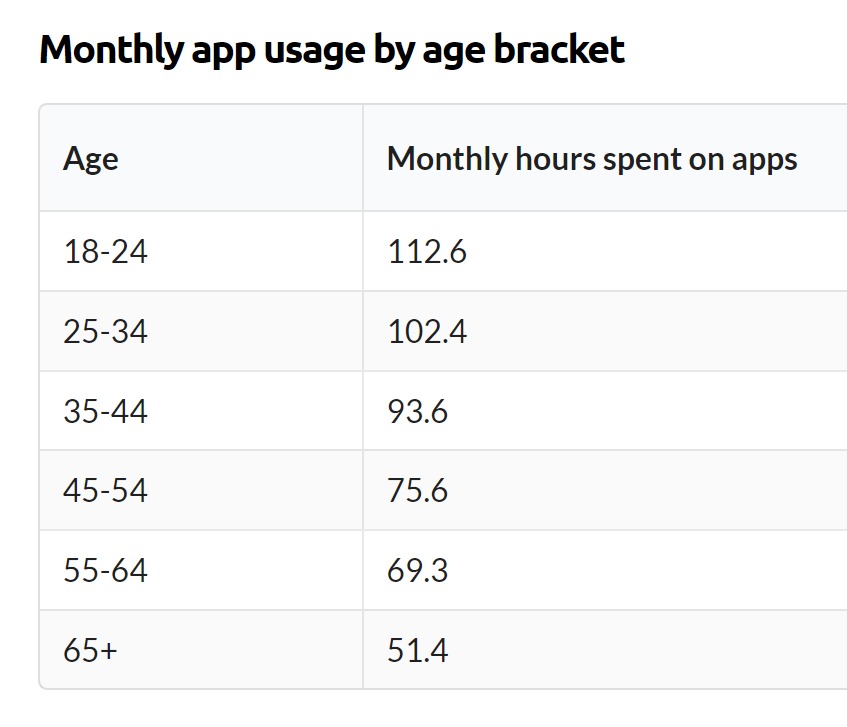 Smartphones provide unparalleled reach and access to billions of consumers worldwide. This converts every business a mobile-focused industry.

Across top 10 markets that were analyzed regarding mobile application trends, the weighted average for usage on a daily basis exceeded 4 hours 47 minutes in 2021 — up 30% from 2019.

Users in Brazil, Indonesia and South Korea topped 5 hours per day spent on mobile apps in 2021.

In 2021 the average American viewed 3.1 hours of TV in a day and spent 4.1 hours on their smartphones.

Apps in categories that are highly relevant to Gen Z are mediums that garner engagement, that include Photo & short Video apps, entertainment, and Social proximity. 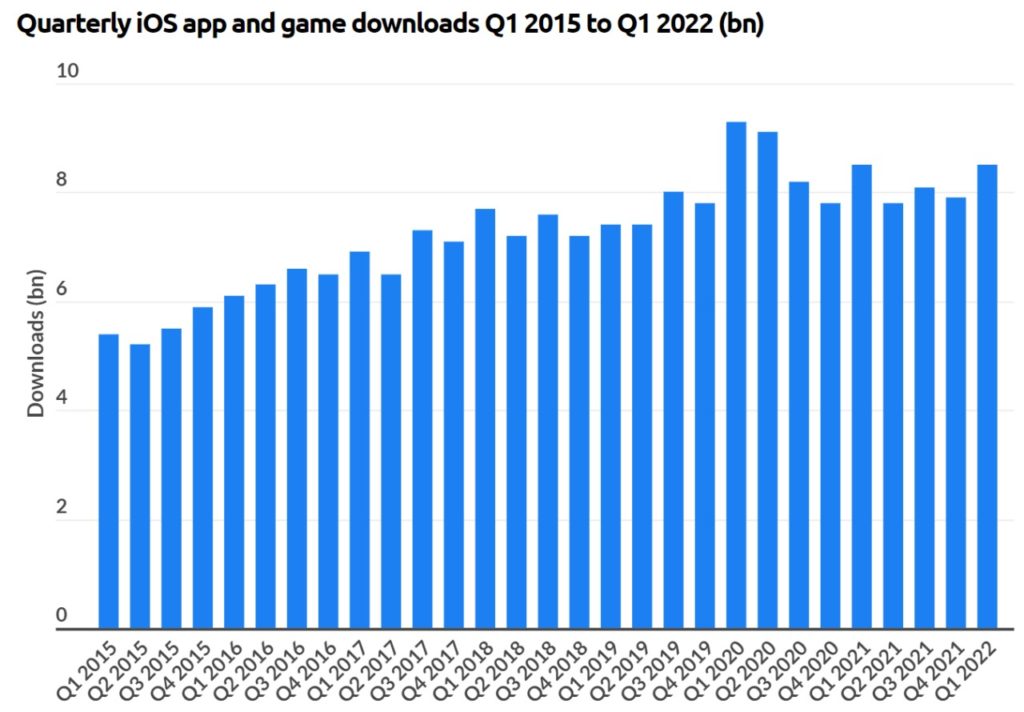 Finance and Shopping apps haven’t made much in-roads to reach higher numbers of Gen Z audience. Yet these categories have experienced strong growth YoY, encouraging entrepreneurs and investors to take a notice. These categories tend to tip more towards Millennials right now.

Differences Based On Gender In App Usage

Sports apps finds maximum traction with males in each analyzed market, whereas Food & Drink apps tend to find favor with females. However, the difference can be minimal in the US for Food & Drink segment. But can be dramatic in markets like Japan.

We also see that the most used apps (considering gender) in each country tend to differ with the category of apps. Shopping apps on the whole tend to tip towards more female overall. Yet Amazon tips more towards male in France, Germany, Japan, the UK, and Canada. Only in the US does Amazon find favor with females.

We have analyzed the categories limited to males and females only.

Mobiles are driving digital ad spend globally. In 2021 an economic rebound enhanced the global GDP by 5.9%. 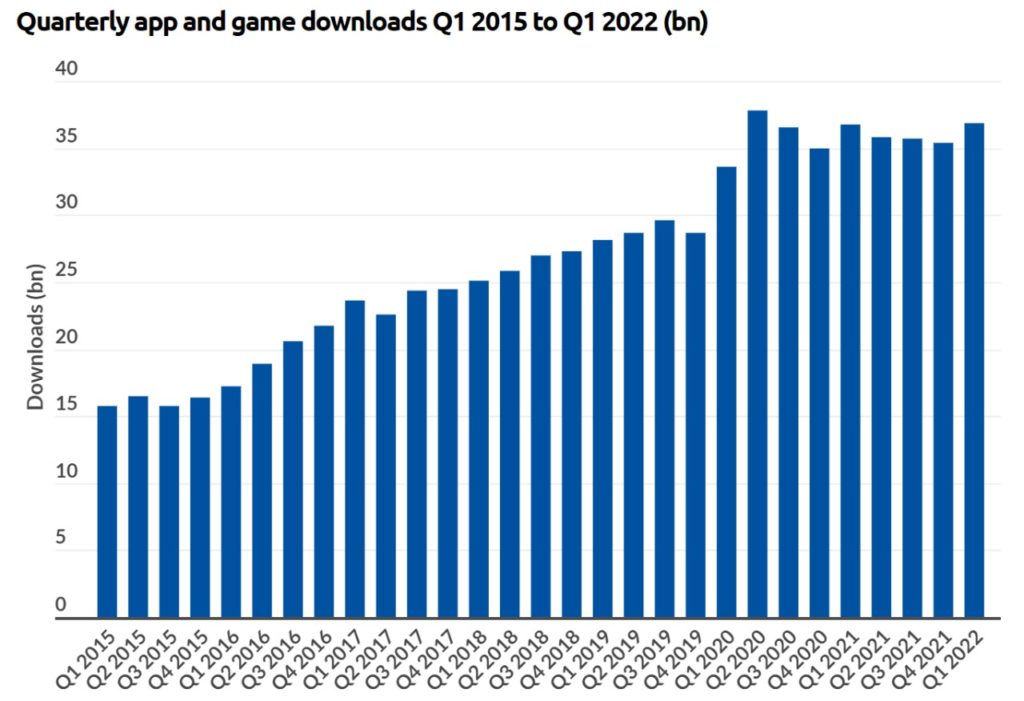 With the Commonwealth Games, Asian Games, US mid-term elections slated to be held this year, digital ad spend is set to soar with the majority driven by mobiles. Brand marketing and performance marketing is set to pick up as businesses and brands exploit smartphone’s broad and captive audience amidst the backdrop of IDFA disapproval.

But China rules the roost when it comes to downloads with 98 billion, followed by India at 27 billion downloads and the US with 12 billion.

As time spent on mobiles increase, emerging categories holding the attention of consumers are getting lucid. Apps that engage with users at a deeper level are Social, Communication, Picture and Short Form Video apps.

Photo & Video apps (YouTube, Instagram and TikTok) have seen exponential increase in market share on time spent. But this has not curtailed existing habits. Rather, consumers have gone on to turn ‘non-mobile’ time into time spent in apps and games.

Consumers are beginning to adopt and migrate to mobiles for games and entertainment. In 2021, a combination of 230 apps and games earned $100 million in annual consumer spend, with 12 of them surpassing $1 Billion.

Improved net connectivity, increased screen size and better hardware have made it easier than ever to enjoy innovative applications and exhilarating gaming experiences. Consumers have now begun to share wallet in mobiles as the existing gaming console and a tool to manage lives.

I have plan to learn mobile app development. Is is worth learning now?