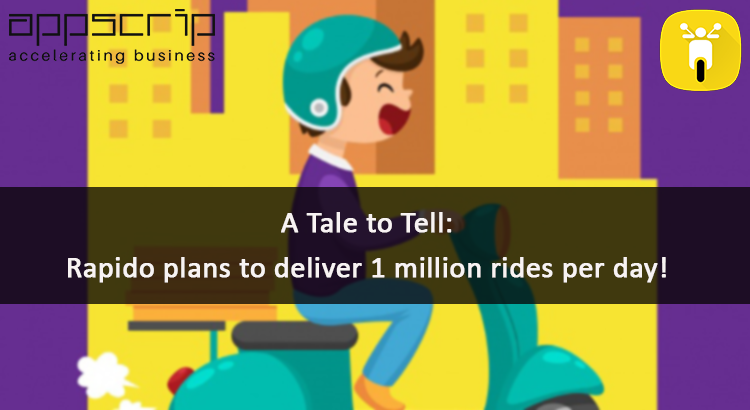 A Tale to Tell: Rapido plans to deliver 1 million rides per day!

Rapido along with being a successful startup, is also one of our success stories whom we have built taxi software solutions for. We are proud to play the stepping stone of its success.

Since its launch, Rapido has never looked back in terms of growth rate.

A  Forbes article states that Rapido has raised $6 million in two rounds of funding so far(2018).

Rapido’s founders stated that their monthly earnings are currently $1.5 million and their operations are profitable in most of the cities it operates in.

In an interview with Forbes, when asked what is next for Rapido?

Looking forward to achieve 1 million rides per day by the end of 2019– Aravind Sanka, Cofounder, Rapido.

Rapido owes all its growth to the robust and scalable technology that supports over a million of rides in a day.

It utilizes Load Balancers, Snapshots, Floating IPs, and the Kubernetes Clusters the most from their cloud services partner DigitalOcean. Its reliability and simplicity contributes in the skillful & efficient functioning of Rapido.

Rapido predominantly uses Node.js & Java and leverages Microservice Architecture to enable them to experiment with more languages other than Java, like Python, Scala and Go in the language stack.

We are planning to make the app more powerful with new features. We will continue to be focused on making commuter’s daily travel faster and cheaper – Aravind Sanka, co-founder, Rapido.

We can say that Rapido’s success is because of quick realization of potential market for bike taxi and the decision of tapping on it.

They understood that the bike taxi niche is new found and is grasping mass popularity amongst users because of the time efficiency and cost effectiveness it offers compared to any other existing on-demand taxi providers in India.

As a result, Rapido is now close to getting 1 Million rides a day.

Rapido’s success also suggests that the on-demand bike taxi niche is open for new entrepreneurs to get it.

Get your own custom on-demand taxi solution built with us !